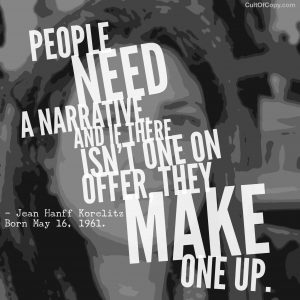 But you throw a human being into the mix, and the flawed little meat computer those mad monkeys carry around just starts making shit up.

Coincidences become portentous. Things no longer just happen. They must have a reason for happening. Events must have meanings. Random outcomes are somehow earned or deserved.

Because people need to have a narrative.

There is a good biological reason for that. The meat computer has a limited capacity.

A narrative is what gives context to raw information. A narrative lets us know if we can ignore it and forget it, or if it's a potentially useful tidbit we might want to commit to memory in case we need it later.

This is why it's relevant. Every writer knows the value of storytelling. Duh. Even us sales writers.

Here is a catch you need to know about as pertains to the quote, though. If you are giving an audience some information, but not wrapping it around a STORY, then your readers will not be as likely to become engaged or remember your vital message for them.

Obvious… But here is what you might not know.

If you leaves out a story, or if your story SUCKS….

They will TRY and attach a narrative to it as best they can.

Unfortunately, we live in a narrative-saturated environment.

Movies, TV, magazines, Internet, etc. have all made most people lazy at storytelling. So their stories suck. Your important info didn't have a story, so the best their brain can muster is, “that kind of reminds me of a thing I read… it was a thing I read online, maybe… what was it?”

So you need to wrap your info up in a story. Lace it with a tale about how you learned the info. Embed it in an anecdote about how that information was originally discovered. Couch it in a made up parable that demonstrates the information in action.

Whatever it is, be aware that if you're not involving a story of some kind, then you're leaving things to chance. You're making the reader work to hard to care about what you said.