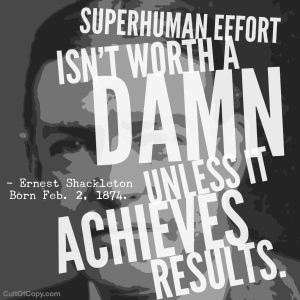 Hustle. Grind. Wake up early. Stay up late. Eat your dreams and shit success. Lots of overachievers say fuckery like that.

The thing is, the best you've got to give won't get you jack if you're not doing right stuff.

But if you DO know the right stuff to do first, THEN put in that Herculean effort, you can pull an Atlas and move the world itself – instead of being Sisyphus pushing the same damn boulder up the same damn hill until the end of your days.

Or hey, just put in a minimal effort. You'll still outpace the people smashing themselves against the machinery without knowing the controls.

What's great about working backwards is you get the MINIMUM pieces and steps. For whatever reason, your brain can't make an overly complicated or fluffy squishy weak plan when thinking back to front.

Then, put all your effort into this AND ONLY those pieces and parts and tasks until you are done. You will probably find you have energy left over. In which case DO IT AGAIN.

Watch those results become real. Watch them compound. Watch people start to see you as superhumanly productive, when really you just put it where it matters.

Agree? Or do you feel that you have to rise and grind and hustle and flow and crush it until you are ground down to a nub?