“Everything you've ever read of mine is first-draft. This is one of the peculiarities of the comics field. By the time you're working on chapter three of your masterwork, chapter one is already in print. You can't go back and suddenly decide to make this character a woman, or have this one fall out of a window.” – Alan Moore, Born Nov. 18, 1953. 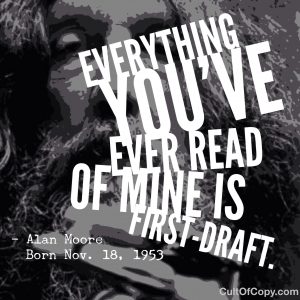 We don't work in the comics business, but writing for yourself as a business on the web definitely follows this paradigm.

Or else while you are tweaking your imaginary concept of a manuscript, your readers have found some other thing to distract themselves with.

You're not writing a novel here. Paper is not being wasted if you publish early and edit later. So post.

And if something bothers you about the first thing when you re-read it later, fix it.

But you should probably instead be busy posting again, instead. Given the choice.

Consider these quotation essays that I post every day, for example. Sometimes, if it’s the second or third time I’m posting it, I’ll throw in some edits or expansions.

But most importantly, I publish. Every day.

And that’s only possible because I made a habit of putting out the work as soon as I created it. Eventually I have a huge pile of content that I can pull from and re-publish, making only minor edits (like this one).

But for you, just starting at this practice, you don’t have a pile yet. So just start. Crank out something today, compose it in the post box and hit the button when done.

Do it as many days in a row as you can. Save the output each day. And then on this day next year, you’ve got something to fall back on.

But while you’re doing this work, you’ll gain a bonus superpower that I can’t recommend developing highly enough.

See, a remarkable thing happens when you practice nailing the big picture points on your first draft with only minor tweaks left to nitpick…

You get good at it.

Others need hours of alchemy to produce a few flakes of gold. Whereas you can spin it spontaneously from nothing, seemingly effortlessly.

And on your first try, even.