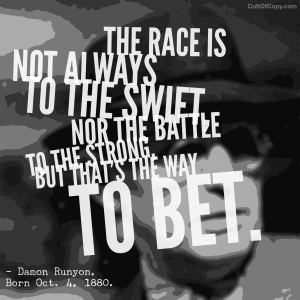 Want to hear a certified true “Secret of Success(TM)”?

People love the story of the one special person who had one special idea, and they took on an uncaring, indifferent, and even cruel world. And through perseverance and hard work and grit and cunning and the magical power of believing in one’s self, the underdog succeeds beyond their wildest dreams and everyone’s expectations. The end. Pause for applause. Roll credits.

That story is fakey-poo. It’s made up. It’s fiction. Even when it’s a “true story” it’s sculpted for dramatic effect well after the real events took place.

The real way to succeed is to imitate what’s working. Don’t plagiarize, but imitate. Imitate from multiple sources. Eliminate mistakes they are making. Look for opportunities they are skipping over.

And then just apply the strategies and techniques and tips and tricks that are so well known and common that they are BORING.

It’s not sexy. It’s not dramatic. It’s not an inspirational story in the making.

But it works. It’s easy. There’s little competition at it, because everyone is too busy trying to be that one magical shooting star and they think the SIMPLE stuff is too boring to even try.

Believing in the need for the phony story is what keeps people from making a product, selling it to people who would like it, asking them for their money.

They think if they make a magic offer, customers will come from the corn fields like ghosts and line up for it.

Bullshit. Send emails. Call phones. Knock on doors. Lick stamps. It’s boring. It’s old. It’s too plain. It’s not a miracle, so it’s not the right thing to do…

Bullshit. Yes it is.

And when you’re succeeding, and comfortable, and everyone looks to you to ask you how you did it, you can tell them how the dunces were aligned in confederacy against you.

…That you conquered your industry with a crazy idea that everyone told you wouldn’t work.

…That you proved them all wrong with the power of self-confidence and a magic talking dog that can grant wishes.

It’s your story. Embellish away. But remember that before anyone’s even going to care to ask you for your underdog Cinderella story, you have to be somebody first.

And to become someone, all you need to do is ignore the stories, do the work, and watch it happen.