“The first time you make something, follow the recipe, then figure out how to tailor it to your own tastes.” – Ruth Reichl, Born Jan. 16, 1948. 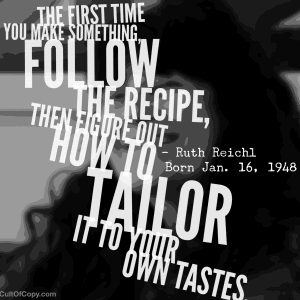 Are you too creative and clever for your own good? I used to be like that. I went to art school. I used to want to do something new and unique and innovative every single time in every single pur suit.

Find the person that is doing the thing most like what you want to do, then imitate them.

I'm sure you've heard that advice.  Almost no one follows it.

Don't fucking change it, or put your own precious spin on it. Just do it. Just like they did it. Follow the recipe.

At least the first time.

Once you do it the way they did it, once you understand that model well enough that you pull it off and succeed – THEN fuck it up however you want to.

So many people mess up by trying to make an art out of business when they can't even color a page in crayon without going outside the lines.

Save the creativity and cleverness for the conversations and messages, but when it comes to models and formulas, follow the recipe.

Learn to do it the way it's been proven successful first.

I say this because I had to TRY it the way others have done it, and FUCK IT UP, in order to find my own way. That unlocked everything. It was like how waxing Miyagi's car suddenly turned into motherfucking karate.

But if I had just started out trying to be creative and clever and do my own thing from the beginning, I would have no idea about my own strengths and weaknesses. You can't just invent your own karate. First, you gotta wax the car like Miyagi told you.

For example, someone once told me not to mix up too many metaphors in one piece. So I used to write that way. And I get it. I did it and learned it.  Clarity.  Focus.  It can be a good way to write.

…But now that I know that recipe, sometimes I want to write about cooking and karate movies and creativity all at once and I say “fuck it”.

So what do you think, little rebel? Who are you going to imitate before you try to innovate?