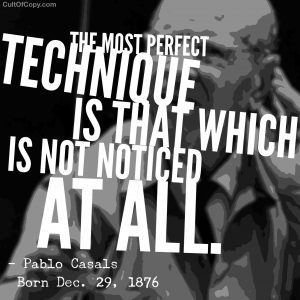 I've written to you here before about developing an appearance of effortlessness. It creates the perception of your mastery among your audience.

Sort of like how a ballet dancer is actually straining intensely and using weightlifter levels of strength, but they use it to look weightless and graceful, as though spinning and flying through the air takes only the wish to do it and slightest of movements.

You can not only do incredible, envious things – but you make it look like something anyone could do – easy, fun.

The true effort and skill that goes into creating that experience for them is hidden by repetitive practice, and made invisible by subtle performance.

And this is how it is for what we do. To the uninitiated – to those rubes and marks not in on the kayfabe – to the muggles not in on the magic – it appears as though powerful feats might just be as simple as some seem to make it look…

And one can charge people a lot of money if you promise to teach them how it really CAN be as simple as a master makes it look.

The simple “secret” is the invisible work. Simple does not mean easy.

Though many are perpetually disappointed to pay for this truth again and again, it sure doesn't stop them from buying it once more down the line when someone dresses it up just a little differently.

Of course, many do put in the effort to do the work and learn the trick and hide the machinery. And they make a nice little audience for themselves and it all repeats.

So is it a trick? Is it a scam? Does it matter if it is, so long as you remember this secret and endeavor to become a seller instead of a buyer?

Let me tell you two little things that I believe will make this work for you.

First, if you sell your expertise, making it look difficult and complex – which it can be at the beginning – will gain you zero followers or fans or even clients.

People know that what we do is difficult. That’s why they don’t do it themselves and want to find others to do it for them, or others who know shortcuts around the inherent difficulty.

So they want to look to someone who is giving off that promise in an obvious way. Someone who is obviously getting it done, but is apparently not even breaking a sweat.

So if this sounds like a phony ploy to you, it isn’t. It’s a method of making yourself into a master. And not just a master of the work, but a master in appearance, and performance of that work.

Try it. Be great.