“Movie directors, or should I say people who create things, are very greedy and they can never be satisfied… That's why they can keep on working. I've been able to work for so long because I think next time, I'll make something good.” – Akira Kurosawa, Born Mar. 23, 1910. 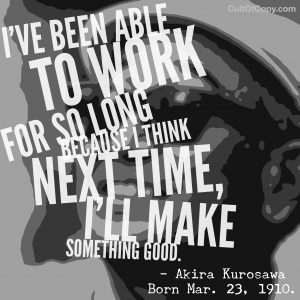 Today, let's talk about defeat. More specifically, the fear of defeat. Of loss. Of making trash and everyone seeing it knowing its trash.

You want to know a secret about humans? Everyone feels that way about the act of creation. Everyone. Every person who thinks “I have an idea” or sees creativity from someone else and thinks “I could do that” – they have the fear.

That's what keeps most people from ever making, building, creating anything.

But the twist is that the successful creatives – the ones who make their living producing work that dazzles, inspires, moves, and transforms audiences? They feel that same fear.

They do. Every. Single. Time.

But it's not a genetic thing. It's a learned thing. You have the fear of defeat, and you just set it over there in the corner and let it watch you work.

It's a choice. It's a way of working that you can learn, and get better at with practice. It never goes away, so you learn to live with it.

And the reality is, you will suck sometimes. And EVEN IF people in your audience LOVE a given work, if YOU think it sucks, you will always think that.

And you use that drive to try harder, or try differently next time. To get closer to your own, probably unreachable satisfaction.

And you produce. Thing after thing, work after work. Eventually you have a body of amazing output that can support the lives of you and your loved ones, regardless of if you're satisfied or not.

But all you need is to hold onto one simple belief to drive your work and banish the fear of failure to his time-out corner for good:

“Next time, I'll make something good.”

And then WORK as though it's true, even if it isn't THIS time. NEXT time, though. And the next. Probably the time after that, too…