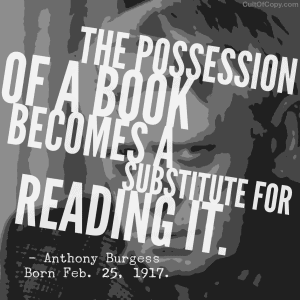 I know a lot of smart people that sell training, or information, and they get very upset about people not taking that information or training and using it as intended.

If that's you, you would do well to remember the quotation here.

People often don't want to act as much they want to possess the knowledge on how to act – you know, eventually. Later. When they are ready. In the future.

It's actually much the same for complicated physical products like tools, too. They are just loading the tool chest to insure against potential eventualities. If they need it, they have it handy, and boy will they be glad they got such a great deal on a killer product way back when.

If they don't use it now, you can't take it personally.

Some people will use your shit. And if it works, they will love it. They will give you credit and thanks and you should bask in that glory of a job well done and a promise delivered.

But seriously, who cares if the customer doesn't follow instructions they paid for?

Isn't it their right as the purchaser to do whatever they please with what they bought? If mere ownership completes the circuit in their pleasure centers of their brain, great.

Hey, if they bought it just to print out, poop on, and set afire, also great. You paid for it, it belongs to you.

In fact, here is what I recommend.

You should take care in your copy to put the focus of psychological relief on the act of purchasing, not in the fulfillment of using the product.

Because for everyone already intending to use your product, it won't matter – they are focused on outcomes anyway.

For the people who MIGHT want your material, but PROBABLY won't use it, why give them a way to feel bad about the purchase later on?

Because eventually they might get mad at themselves for squandering money and indulging in things they don't pursue. And if you positioned your item strongly in that way – if you plant the seeds of dissatisfaction in their mind – they project that disappointment onto YOU.

You tricked them into buying shit they didn't need!

But really, isn't it their fault? By taking the focus off of execution and placing it on acquisition, you remove pressure. You allow them to enjoy the scratch of the itch even if they won't apply the creme to cure the rash.

And if they feel guilty down the line, they blame only themselves. No refund demands or chargebacks or bad attitudes posting ill shit about you to prospective customers.

Well, less of that negativity anyway. Some people are just idiotic dicks.

But for the majority of circumstances, you do better to help the consumer indulge in their particular brand of retail therapy and accept the dollars they want to spend with you.

The people who publish skateboarding magazines don't get mad if the guy who buys a copy can't Ollie and doesn't even own a board.

The people who sell hammers don't care if you hang it on the shed wall to never so much as kiss a nail with it.

The horse will drink of it wants to. Your job is just to point to water and collect your fee. If the horse drinks? High fives all around! If it doesn't, shrug it off and find more horses that claim to be thirsty, and escalate the horses who drink to the top secret kool-aid fountain (for a higher price, of course).