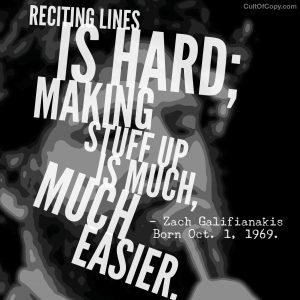 The most valuable skill you can start developing now is performing. As in, being comfortable on stage or on camera. And that can be intimidating.

I hated it. It was scary when I was first starting out. But I'll tell you a secret that made it a lot easier.

Try to “write” as little as possible. You're probably a writer of some kind if you're following me for any reason. And I know that will make you want to script things.

Because listen, if you need to script everything in order for you to get on camera or on stage, you then ALSO need to learn to ACT and EMOTE – and be able to do it WHILE trying to recall and recite lines.

Most people end up reading it off a prompter, and then you just sound like you're reading aloud instead of actually speaking.

Instead, just PRACTICE PERFORMING as often as possible, WITHOUT preparation.

It will suck at first. But that is just discomfort and fear.

The practice will erode that discomfort and fear away and eventually, the camera or the crowd will become familiar to you as a friend. You will be able to be as casual and extemporaneous as you are among your real friends.

And once you're there, it is SO MUCH easier to just make stuff up – turn on the camera and riff, or spend 10 minutes to do enough sparse notes for a whole hour-long talk.

If you can have a decent conversation with a colleague, you can port that directly to creating HIGH PERCEIVED VALUE content like talks and video.

The secret is to not write it. Become comfortable winging it. Or you're going to have trouble competing with people who CAN perform like this.

And basically every teenager today is coming up in a culture where this is their every day mode of interaction.

If you want to try it, here is a simple process I used myself to get better at presenting off the cuff.

Step 1. Commit publicly to doing a weekly “show” of some kind online, preferably streaming, so there is a live audience who shows up. There are tons of places to do this.

Step 2. Prepare ONLY as much material as you need to have at hand to fill the time, which should be at least 30 minutes to an hour TO BEGIN. Later, when you’re better, you can do shorter “episodes” but that is actually harder at first.

Step 3. The goal over time is to prepare less and less, so that eventually, a single concept is something you can riff on for whole minutes at a time. Other long term improvement goals are managing your pace (slow down) and allowing for pauses without having to say “umm” and “uhh”.

Step 4. As you go, you should be promoting the show, preparing a topic the week beforehand, and archiving all the content. Give people a way to subscribe and interact.

Step 5. By the time you are good at this, confident and able to rip it live off the dome, you will have an eager audience of fans who like your stuff. That audience will only grow, and P.S. they like to buy stuff, too.

Try it. The only downside is, you created a bunch of high-quality, high-engagement content that you can use for a million other things even if you don’t continue the show… wait. That’s not really a downside…