“People don't mind being mean; but they never want to be ridiculous.” – Jean-Baptiste Poquelin, aka Moliere, Born Jan. 15, 1622. 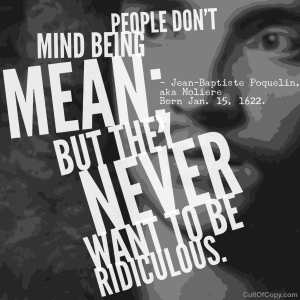 To make people into allies, make them an accomplice. If you can get them to indulge in complaint and insult (even in private) against their enemies, you create a kinship.

There are few things people fear and avoid with greater intensity than embarrassment and humiliation. People fear public speaking more than death for this reason.

And for those who want to go a step further, you can strengthen yourself against accusations of ridiculousness by being selectively and occasionally ridiculous on purpose.

Be goofy at times. Be self deprecating. Be jokingly humble, and sarcastically vain. If you mockingly portray negative traits that your enemies may accuse you of, it makes them hard to stick.

For example, people often tell me I am egotistical and intellectually vain. That can definitely be true. But it's also why I bought phony titles online so I can officially be the Rev. Dr. Sir Colin D. Theriot. I've made a joke of it, and now I own the joke. It's my joke. No one can make that joke of me – I beat them to it.

Owning a measure of ridiculousness is armor – and when people see you don't fear what they fear the most… You're their hero.