“When I was a young comic just starting out, I was very cautious, as I didn't want to alienate people. George Carlin's bravery became a benchmark. I became perfectly fine with alienating some people in the audience. That just comes with the territory.” – Paul Provenza, Born Jul. 31, 1957.⁣ 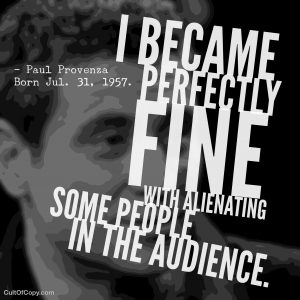 ⁣
So you want to build an audience of raving fans?⁣
⁣
Maybe even a “cult” of your own?⁣
⁣
This is one of my best secrets: deliberately piss some people off. The whole trick is in WHICH people you piss off.⁣
⁣
Piss off the people who your desired audience dislikes. Blair Warren referred to this as letting people kick sand in the face of their enemies, just like on the Charles Atlas ads in the back of old comic books.⁣

Now, I know some people are averse to upsetting anyone for any reason, and I get that. But what you need to know is that you cannot create a STRONG ATTRACTION without a STRONG REPELLING FORCE.

It’s like magnetism, in a way. We want to draw the right people to us with a powerful feeling of connection and rapport.

That is most easily and quickly accomplished by visibly and frequently pushing away those who are “not right” for your following.
⁣
It's perfectly fine – perhaps even preferable – to repel people who wouldn't like you much anyway. It saves everyone time. Help people decide to be IN or OUT as fast as possible.
⁣
Plus, it lets your desired audience know you are all in for THEM SPECIFICALLY, to the exclusion of other, lesser lamers and wastoids.⁣
⁣
They feel special, and they live through your eye-gouging of their “enemies” vicariously. ⁣

If you're not antagonizing someone, you're not REALLY getting to the heart of whatever you're discussing. That's because for people in denial of the capital T “TRUTH” – hearing the reality they won’t face is what is PAINFUL.⁣
⁣
So if you're speaking the real stuff your audience really NEEDS and WANTS to hear, then it will naturally piss off those who just do not want to hear it.⁣..

And you do not need to name names or become a bully that targets specific people. Decry practices, beliefs, ideas, habits, ideas. Villain-ize the general groups of people who would promote and propagate this bad mojo to the detriment of YOUR flock.

Keep them out, and let your audience know these outsiders are NOT welcome within. They DO NOT belong.
⁣
The only thing to keep in mind is this:
⁣
Don't fake it. Don't aspire to be controversial and offensive just to do it.

We aren't out to hurt people just for jollies. Make it matter. Make it about what you really dislike and despise in your world, and let those who can't handle that be opposed to it.⁣
⁣
And by them opposing you, they only push the right people to you.