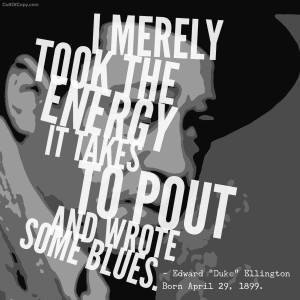 Hey, guess what? Everyone has problems. Big whoop.

What do you do about your problems? Take them? Endure them? Or do you put them to work? As motivation. As fuel.

If you're not yet doing the things you want to do, and making a good living doing exactly that, why not?

They find the time to go endlessly searching online for people who are doing it, but they don't reach out to those who can actually help.

They instead find other people who are also not doing it, but wish they were. They become codependent and parasitic. They feed off each other's sympathy – instead of starving that shitty instinct to just sit back in surrender.

And maybe they could live comfortably in that state of complaining. Settle for being merely entertained by simple distractions, but never CHALLENGED.

But they think you get credit for just having the dream. They're wishing. They're hoping. “One day, I'll have an idea. One day, I will actually do it.” And the never-gonna-be vampires praise them and pat their back for keeping them company in stagnation.

Or you can do something else.

I love TV and video games and comic books. But instead of indulging in those right now, I'm here, writing this to you. And I'll reward myself with indulgence later, when the work is done.

But I don't mind the work.

Because this work is my dream. I made time for it over past years. I make time for it now. I feed it the energy that I might give to other things. But the fact is I love doing this. This IS indulgence. But it's also productive.

How can you take the energy you're currently using to avoid living your dream and repurpose it?

What can you do today so that you're still having fun, but it's furthering your true pursuit of happiness? It's not buying something. It's not consuming something.

It's in MAKING something, and SHARING it.

Instead of complaining, posting on this website or that one – about how much you hate this or that, create something. Something that another person would find of value. And then share it with them.

Do that every time you feel like you have some anger or resentment or sadness or whatever. Convert that emotional energy into output. Twist it around and put it to good use and then tell people how you did it.

Do that and report back.