“The first thing we become convinced of is that man is organized so as to be far more sensible of pain than of pleasure.” – Jean Anthelme Brillat-Savarin, Born Apr. 1, 1755. 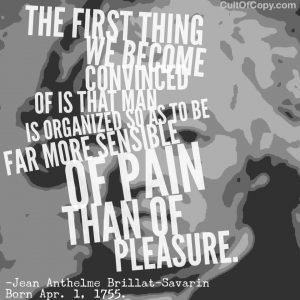 The persuader would do well to learn that when it comes to making someone take a desired action, there are two general forces at play: one positive “attracting” force, and one negative “repelling” force.

Most beginners or laypeople would think that the positive attractor would be more powerful. The old adage says “you catch more flies with honey than with vinegar”.

But they would be dead ass wrongo, friendo.

People do like positive motivators. But the thing is that in our modern lives in the 21st century, we take for granted a certain baseline comfort, especially among those of us who live in a decadent western consumer culture.

So while a pleasurable thing MIGHT be nice to chase, just doing absolutely nothing is also almost always guaranteed to be just fine, too. And humans are sort of evolutionarily wired to conserve energy.

That's why we love being lazy. And if we are comfortable, and at ease, we have a HIGH amount of inertia and are seldom inspired to take any kind of action or want to make any kind of change.

But a NEGATIVE motivator is almost infinitely more inspiring of change and action to implement that change. Avoidance of pain, discomfort, worry, fear, etc. are all MUCH more powerful motivators of ACTION.

Again, this is a deep, evolutionary response. That's the main reason we are designed to conserve energy – at any moment in more primitive times, we may have to flee or fight for our very lives against a predator. DANGER gets our IMMEDIATE attention. It's almost impossible to resist.

We want to use that when we aim to persuade. Especially when we try to sell. We want to use negativity (or even just potential for it) to create that flee or fight reaction. We want it to create an anxiety and a desire to do SOMETHING to remove that discomfort, or get away from it as soon as possible.