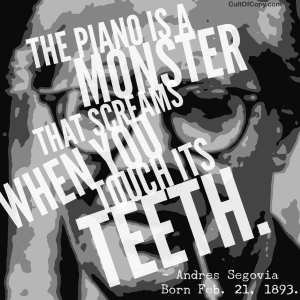 What's funny is that Andres was a guitarist. So he was describing why he hates he piano and doesn't play it.

But we are sick fuck writer masochists. And our keyboards are beasts that scream when we touch their teeth. We WANT to do it.

Or at least, if you want to be a writer that people want to read, you do.

They want you to pry open its jaws, reach all the way into the back of its gullet, and pull out a pearl of wisdom, or a nugget of gold.

They want to see you get nicked, too. They love it when you get chomped and maybe even leave behind a digit or limb.

This is the secret of making people salivate to read your work.

So metaphors aside, what am I talking about? You have to write what people already believe Is true, but that they fear or fail to express or admit.

This is the backdoor into their brains.

This is what makes you the brave hero they long to be. And if you sell stuff that helps people be like you and do what you do, this works exceedingly well.

You drag out the hidden truths that they've let their own beasts of fear and conformity and confusion swallow down. You conquer the beast. You tickle its teeth and make it sing siren songs.

But you do this at a risk to yourself, too. It's tough to wrestle monsters. In our arena you risk loss of profit, mockery, challenge, ostracism, and worse.

The reader has two conflicting desires. They want to be more like you, and want you to succeed, so their optimism is proven right.

They also want – at least a little – to see you face trouble and harm. And possibly even suffer for it. Because then, again, their pessimism is proven, and they feel they chose right for living meekly.

But they don't know how it turns out… And so they read what you write, and they watch what you do. They can't help it.

Are you too timid to face this monster? Or are you ready to grab it by the tongue and squeeze until you have a crowd of people who pay you to watch the carnage.