“The river flows at its own sweet will, but the flood is bound in the two banks. If it were not thus bound, its freedom would be wasted.” – Vinoba Bhave, Born Sep. 11, 1895. 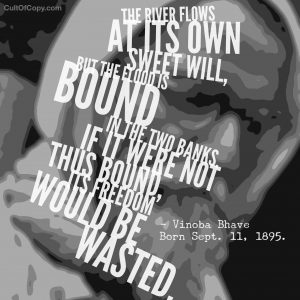 You're creative. You're smart. You're talented. You're skilled. So what? Who cares? What does that DO for anyone? You or anyone else?

That stuff doesn't get you anything. Not by itself.

Having all that power with no direction is just a flood. Energy spread thin and wasted without accomplishing anything.

In fact, it's even destructive – washing away half-compete projects and partially formed ideas, never coalescing into anything at all.

But when you set goals – clear, specific goals, broken down into component tasks, you can CHANNEL that creativity, smarts, skill, and talent into something PRODUCTIVE.

The same way a mill channels flowing water to turn the little gears that make the big machines do the work of not just one, but many people.

And even if you only check off one small task, you achieve PROGRESS toward the overall goal. The plan gets implemented bit by bit until you've built something substantial and meaningful.

The way a river can carve a gorge through millennia of sticking to the plan.

Channel your gifts and qualities – do yourself the favor of planning, in detail, exactly what you want to do. Put it to paper. Print it out. Put it up where you work. Mark it up as you knock tasks down and change the plan to meet the world.

But do it. Don't just think about it. Decide what you want. Make a plan. The flood becomes a river, and that river flows where you want to go. All you have to do is float.

What's your master plan? If you don't have one, why not?