“People often ask me about what constitutes a nerd-friendly show – like, does it have to have sci-fi elements? But I think it's just a show that satisfies the secret craving we all have to be obsessed with something and not feel at all stupid about it.” – Dan Harmon, Born Jan. 3, 1973. 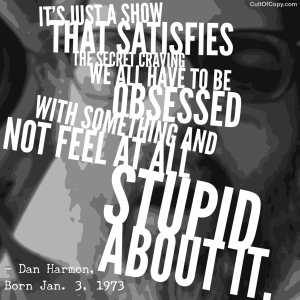 It's not just a useful observation for making nerd friendly TV shows.

If you create continuous content for a particular audience, always keep in mind that to some degree, what the audience wants is to wallow in that subject.

They want to indulge and delight in it and get elbow deep in it.

They can get the surface-level stuff anywhere.  So it's up to you to go deep with them. Nerd out over minutia. Talk about the weird tangential shizz.  Look for connections and comparisons and contrasts that no one else is really going into.

For example, I talk about sales and marketing copy by way of comic books and mythology and role playing games.  Or by quoting noted figures on their birthday and riffing on their thoughts.  It's different.  It feels deeper, stranger, and more compelling for it.

Let’s use an analogy. You're not the commercial drive-time radio DJ playing the top 10 hits we are all sick of weeks ago.

You're the weird college DJ on at 3 am playing only b-sides off a 50 year old crate of records with no labels that you found in the station’s basement.

Where are the true heads going to tell them to go?

Make that place where the obsessive feel at home, and you might find an audience who are obsessive about you and your work.

And those hardcore fans can become evangelists that help draw in even more people as your crowd becomes large enough to be intriguing by size alone.