“The average voter has to hear a point seven times before it registers.” – Paul Weyrich, Born Oct. 7, 1942. 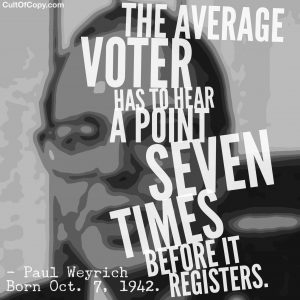 If you want your message to be received…

Here is the rub.

The trick to making this work is that you can't just say the same thing over and over in the same way. Repetition BUT NOT VERBATIM – is key. Because if I ignored it the first time. And I ignore it the second time. Chances are, I’ll be completely and subconsciously blind to it by the third identical repeat.

Hell, let’s say after six or seven repeats, I actually DO consciously notice you. But what I notice is that you’re basically “spamming” me the same thing over and over and over. How dull. How annoying.

How can you repeat things enough – 7 times to be noticed, 12 to be remembered – 20 plus to trigger an action… That's a lot of hammering on a single nail without becoming predictable and bland and monotonous. How can it be done?

You need a way to deliver the KEY INFORMATION you want to impart, but make it real, unique, and valuable in and of itself to consume each time. Do this, and people will notice, react, and respond – but almost never with annoyance.

Here is a basic formula. In addition to your core message, you want to be: interesting, valuable, grateful, and promise more to come.

And you don’t have to be creative.

Borrow something interesting from elsewhere, and just attach your message to that. Provide some useful tidbit, or even just a chuckle or acknowledgement. That makes the message worth consuming for the recipient. And when you promise yet more to come, that creates anticipation and eagerness for the next tasty bit.

That means you can hammer and hammer at that nail until it's flush – but the nail won't complain. IF every blow is a distinct and interesting tickle instead of pounding only on anguish and boredom.

Here are seven more quick ways you can reiterate and replicate your key message points WITHOUT actually repeating yourself verbatim:

1. Multiple delivery modalities. Email. Blogs. Social shares. Videos. Memes. Infographics. Put the information into many formats and leave them in the places people will find their preferred inputs. This allows people to be exposed to the same information multiple times, but without it feeling annoying or repetitive. Instead, your message gets definition and dimension.

2. Anecdotes you find. Stories about yourself and ores you've heard that create parables for your ideas. Stories that back up your points and reinforce your message. Collect them and share them, and each one you tell reinforces the message you're trying to repeat without beating anyone over the head.

3. Real world examples. Subtly different than anecdotes, this is when you can cite a source. An article, a post someone else made, data, a study, a reference work, news clips, anything that shows that your idea is something that can be observed and measured as truth in the objective universe, and not just in stories.

4. Testimonials about your message. This is when you share quotes from people you know, people you've helped, or even just total strangers. What they say verifies and validates what you've said before. It comes from their brains, in their own words, describing their own experiences – but it parrots exactly what you've told your audience before.

5. Reminders in sequence. This one is sneaky, but basically, you get people to agree to attend an event (real or virtual), where as part of the impending deadline, you have an excuse to send reminders. Those reminders can keep repeating and reiterating what the event is about. And because there is a deliverable, the repetitiveness doesn't irk, but increases excitement.

6. Authority validation. Find instances where instead of regular people validating your idea, celebrities and experts and authors and pundits basically confirm your ideas. They say things that you can cite as proof that even the elite “somebodies” out there get what you've been saying all along. Specifically, you want mouthpieces your audience will instantly recognize and respect.

7. Refreshers for the long timers. Another subtle one here, wherein you position your message as something you presume your audience already knows, but everyone can use a refresher. Everyone can be reminded of things they think they already know, but maybe aren't applying as well as they could. A return to basics. A breakdown to fundamentals so you can rebuild even better.

And there you have it, seven ways you can leverage to keep hammering your audience with the information you need them to notice, accept, internalize, and act upon.

Have you seen me use these? On you? You have. If you noticed the repetition and minded, I guess I need to try harder.