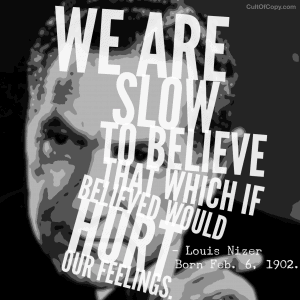 We don't realize how much of what we do and say and think is a result of our brain acting on its own to protect our sensitive emotions.

We are quick to reject anything that might make us feel bad about ourselves.

However, we are quick to accept the idea that some villainous force has conspired to wrong us.

So if you need to frame an argument to get a reader to change their belief, you must frame it in terms of outside interference rather than pointing the finger.

For example, if you sell a diet – you don't want to try and make the prospect believe their own choices and habits have made them compromise health and fitness.

That may well be TRUE. But we don't deal in truth. We deal in stories. And “everything bad that happens to you is your fault” is a really unpleasant story.

So don't tell people that story. Not if you want them to give you their money. Give them a story where they have been wronged. Lied to. Screwed over. Maligned.

Blame it on metabolism, or fast food advertising bombardment, or low quality foods being abundant and high quality food rare. It's society. It's upbringing. It's Martians.

So it's not their fault… Even if it is. Doesn't matter. It's not, so far as we are concerned.

Because their money doesn't care whose fault it is. So neither should you. Give them a nemesis, let them have a scapegoat. Provide excuses.

So long as the underlying truth is still delivered: that they are eating incorrectly, and the solution is to change it.

And it just so happens that you know of such a transformational solution they can have… in exchange for money.

Everyone wants one. Anything can be one.

If you sell it right.