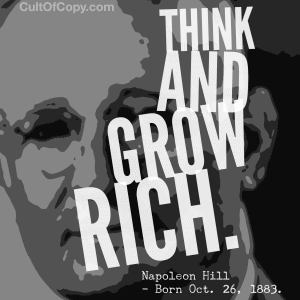 This guy? Huge phony. A scammer and a liar. It’s true. If I’m the first guy to tell you, I’m sorry. He’s real popular in bizopp self-help entrepreneur-bro circles.

Some people swear by his written wisdom, and some successful people at that! So Hill can’t be full of it, right? Yeah, he can.

I will explain how. It’s not hard to spot when you know the con, and you can see it in a million places even today. And then there is a whole other layer where he made his crap into a kind of truth, and there are people who genuinely believe Hill’s work helped them. Did it? Maybe. That’s not the scam part.

What he made and wrote was fine. Not my flavor, but people like it. If he had just not LIED about the SOURCE of his stuff and misrepresented it, there would be no problem. You’ll see what I mean in a moment…

But first, a promise.

You’ll learn how to do what he did WITHOUT the scamming, so that’s good, right? 🙂

OK, so, Hill wanted to get into the self-help biz. He wanted to write books that would sell. People like to make money. So he had a GOOD idea. “What if I interview and shadow a bunch of wealthy successful people, and collect and compile their wisdom and advice? People will love that!”

An ethical execution of this idea would have involved hustling to get those interviews and sell your project to someone who can finance it through production and publication and then rake it in.

Problem is, instead of doing that, Hill decided it would be better just to pretend he did it, and write whatever he felt like. A broke guy looking for a hustle tells readers what they THINK rich people will say, and sells it to them.

What he seems to have done is to just take all the previous adages and maxims and wise sayings from tons of different sources and he then sort of rewrote them in his own words.

Can’t go wrong quoting old sources. The reason they’ve been remembered and repeated is because they’ve been tested for truth against time.

Hill was right though. Pretending to have hung out with Andrew Carnegie and others and milking their brains for the secrets of creating success – people LOVED getting their hands on that kind of material. He sold tons of books. He made tons of money. He became an expert on success, having earned success by basically lying.

But again, I want to re-iterate, he COULD have just actually executed his idea for real instead of lying. OR he could have just republished and reformulated old, proven wisdom and been truthful about it. Both could have been successful and legitimate.

It’s the lie that makes what he did a con.

But here is what happened next.

Like I said, he sold a ton of books. Some of the people who bought that stuff were natural, talented over-achiever types. They’re always vacuuming up stuff to feed their ambitious brains and they get ahold of this guy – it FEELS like he is some super genius.

Because he’s dropping jewels of wisdom with ease! But it’s because this type of action-taking decisive person i. His audience is naturally predisposed to being unfamiliar with the original historical sources of these sayings.

They don’t realize that he’s offering a curated collection from all of history, and not just “my personal shower thoughts” or whatever.

These achiever folks go on to achieve. It was their destiny.

They were going to doggedly pursue it forever until the grabbed what they wanted, and some folks like that turn tenacity into success. And inevitably, someone trying to FOR REAL do Hill’s old idea will want to interview them and ask their secrets. And they’ll cite Hill. Because he was the spigot on the keg of that type of self-help feel good rah-rah.

Are you seeing it now?

Have you seen how you can adapt Hill’s game to a LEGIT stream of content? How it can be aimed at the same audience of people who want to get stuff done?

Can you be a curator, collector, distiller of the wisdom they will need to make their goals reachable?

If so, you will get recognition and credit and requests to help and work alongside.

Helping them helps you. You get a slice of credit, testimony, endorsement. Now when you talk about success and how to get it, you’re telling your own story. It’s true, it’s real, it’s valid.

No dishonesty or misdirection needed.

Can you pull it off?