“Anything that isn't opposed by about 40 percent of humanity is either an evil business or so unimportant that it simply doesn't matter.” – Russell Baker, Born Aug, 14, 1925. 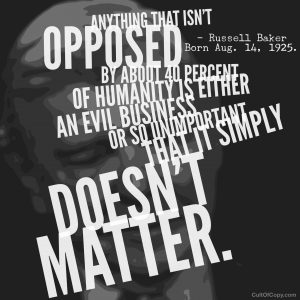 Whenever you're formulating a product, or even just trying to market an existing product, it's important to think about who will oppose it.

If the answer is zero, it doesn't mean it won't sell. There are plenty of successful mass market products that are offensive to none and opposed by no one.

But they aren't IMPORTANT to anyone.

There is nothing that can't be made more appealing to the RIGHT audience by making it more unappealing to the WRONG audience. That opposition is an attractor and enhancer.

The same way a teenager will like music more if it pisses off their parents.

The same way a red voter will like a candidate more if they piss off the blue voters.

The same way a fashionista might like an outfit more if they knows it provokes reactions from their rivals.

That's why you need to figure out who it's safe to piss off and rile and push away, so that they will be opposed to what you're offering. Not everyone. And not just anyone.

But the right opposition can make all the difference.

Don't think ONLY about who your thing is for. ALSO think about who it's definitely NOT for.

Who would hate it?

Why would they dislike it?

Is it about the niche, the buyer, the product itself?

Are they “haters” or competitors or dead weight complainers holding your prospect back from the greatness they could achieve if they buy from you?

Show that potential for vexing one’s enemies or opponents to the people who would love your thing. Use that positioning to draw them even closer to you. Even while further pushing them away from what they oppose and reject.