“There is no persuasiveness more effectual than the transparency of a single heart, of a sincere life.” – Joseph Barber Lightfoot, Born Apr. 13, 1828. 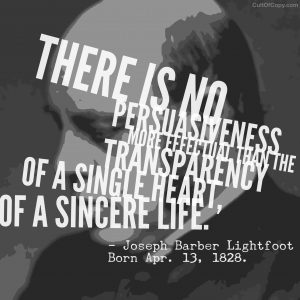 Let's define a term temporarily for the purpose of this piece. I'm talking about your average bullshitter. And by “bullshitter” I mean the kind of person that is just always talking shit.

Not necessarily maliciously. But they are just always inflating and embellishing and bragging and one upping all the time.

It's an attitude a lot of sales people get, and a lot of copywriters, too. Success can get the ego involved, and combine that with competitive coworkers and it's a recipe for becoming a bullshitter.

Here is why it's bad when that happens.

Bullshitters are opaque. What I mean is, you can't see through them or into them.

They are hard to put any kind of faith in, because you can't tell what is real about them. You don't know their inside. You don't know if what they say is real, because it may just be more bullshit.

So therefore, you can't trust them. What are they hiding? How do they REALLY feel? Are they just lying to take advantage of you?

That makes bullshitters have a hard time persuading people. I mean, they can lie and trick people OK. But they obviously can't get away with that for long.

There is just always something “off” about them. They may be lovely people. They are often hilarious. But they essentially black out the window into their souls with all that smoke from the bullshit.

And that makes you LESS GOOD at selling stuff. People just get a feeling that you're not on their side, because they can't read you.

What should you be instead?

People who can be sincere (or fake it) – people who let even strangers in with a confessional honesty?

Those people can sway masses and individuals with equal aplomb. Because people always feel like you are being honest. Because your feelings and intentions and intent are always apparent.

Sincerity seems transparent. It seems authentic. If you can really seem like you truly believe what you're saying – even if it's bullshit…

Then there is nothing more effectual.