“Everyone who achieves success in a great venture, solves each problem as they came to it.” – W. Clement Stone, Born May 4, 1902. 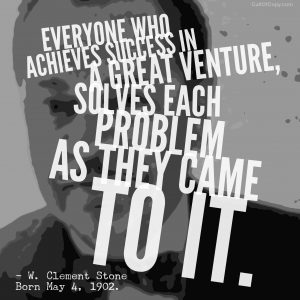 Generally, Stone is full of shit. But this is a good quote, and true to boot.

Preparation is good, but it will not remain intact in the face of executing those best-laid plans.

At some point, there is such a thing as over-planning, overthinking, over-preparing.

What really matters is having the resourcefulness and determination to meet the waves nature sends to sink you – and surf them.

Problems emerge. Difficulties arise. Don't fret over them. Don't waste time trying to avoid them at all costs, especially when they are “maybe” kind of problems.

Instead of preparing a master plan that covers all possible eventualities, get yourself a toolkit, and some trusted advisors, and get out there and start fucking shit up.

Start doing it. Solve your problems as they arrive instead of standing still thinking about how to never have any problems. Because that's a fool's errand. You'll never accomplish a wrinkle-free success.

So you may as well just get going. Do it. Whatever you're dreaming of doing.

Bet the fucking bank the universe is gonna try and stop you. Climb over the obstacles. Break down the doors that close in your face. Don't accept “no”… Don't accept “can't”…

Because a magical thing will happen.

Eventually, you will either conquer a problem no one's ever faced before and become an innovator – and profit greatly…

Or you might even fuck up so bad you can serve only as an example of what not to do – and you can even profit from that, too.

Presuming you're willing to solve that problem if and when it arrives on your doorstep.